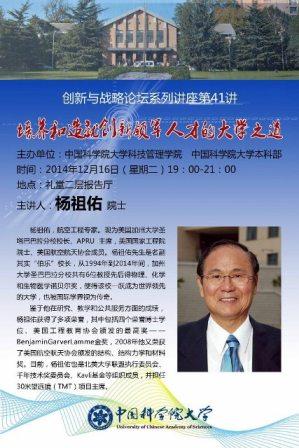 He has served on scientific advisory boards for the Department of Defense, U.S. Air Force, U.S. Navy, NASA, and National Science Foundation. He is the current chair of the Association of Pacific Rim Universities, and a past chair of the Association of American Universities. He serves on the President's Committee for the National Medal of Science and the Kavli Foundation board, and is chairman of the board for the Thirty Meter Telescope project.

Dr. Yang specializes in aerospace structures, structural dynamics, composite materials, finite elements, transonic aeroelasticity, wind and earthquake structural engineering, and intelligent manufacturing systems. He has authored or co-authored more than 170 articles for scientific journals, as well as a widely used textbook on finite element structural analysis. He has guided 54 Ph.D. and 20 M.S. recipients. He continues to teach an undergraduate course every year, and is currently guiding three Ph.D. students with support from National Science Foundation grants. In 2007 he received an honorary distinguished teaching award from UCSB's Academic Senate.